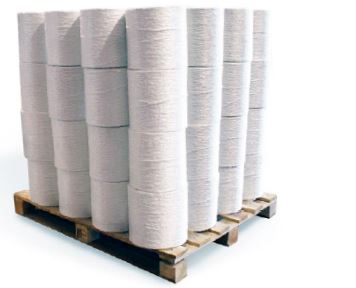 Already the ancient Phoenicians, Egyptians and Greeks knew how to make fiberglass. They knew the meth­ods of glass’ thermal softening and stretching to fibres. For example, the ancient Egyptians made containers of thick fibres of heated glass. This raw material was well known and used also much later, though not to the scale of today. For example, the deco­rations that covered Napoleon’s coffin were made of fiberglass. Nevertheless, it was not until the 1930s that the fi­bre was massively manufactured and used in industrial products.

Patent applications filed in the USA between 1933 and 1937 show how conceived and developed was the manufacturing process of the materi­al, which has revolutionized the global industry in a short time. Today fiber­glass is used in many applications, which can be divided into four groups: thermal insulation, filter media, struc­tural reinforcement and fibre optics.

First a glass wool was manufac­tured of discontinuous fibres. Next, a method was developed of produc­ing continuous filaments with diame­ters of only 4 microns and lengths of hundreds of meters. Further discov­eries helped to reduce costs, making the fiberglass industry profitable. The turning point was the 1938 merger of two industry leaders, Owens Illinois Glass Co. and Corning Glass Works. The merger produced Owens-Corn­ing Fiberglass Corp., the first fiberglass manufacturer to call their product Fiberglass. This name quickly became the default name for this type of ma­terial. It did not take long for the next manufacturers to come up with new product and manufacturing technol­ogy enhancements. That’s how the global market was established with production volume of 5 million tonnes a year.

As a standard, glass fibre is made of melted silica sand (SiO2 silicon di­oxide, commonly called silica). Silica sand, when heated to above 1200°C and then cooled to room temperature, crystallizes and passes into quartz characterized by a rigid atomic struc­ture with high degree of order. Glass is produced by altering the temperature and cooldown rates. Silicon dioxide heated to 1400°C and then rapidly cooled, doesn’t crystallise. The process produces an amorphous material with a random order of atoms, which we know as glass.

The glass making process has not changed since the 1930s. While mod­ern technology has improved the entire process and allowed for a signif­icant increase in the scale of produc­tion, the essence of glass making has remained the same.
This process can be broken down into five basic steps: batching, melt­ing, fiberization, coating and drying/ packaging.

Although a viable commercial glass fiber can be made from silica alone – and on an industrial scale – typically other ingredients are added to im­part special properties that are useful in specific applications. In addition, these additives reduce the working temperature.

The following table shows the per­centages of individual additives in se­lected types of glass.

In the first stage of fiberglass forma­tion, appropriately measured amounts of silicon dioxide and additives are mixed. This is the way to prepare the batch. Batching has become auto­mated, and all ingredients are stored in dedicated silos with computerized weighing systems. Then the ingredi­ents are delivered by pneumatic con­veyors to the mixer. 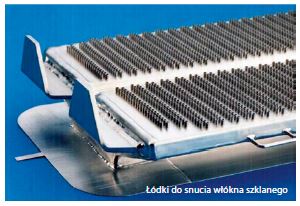 The pre-loaded batch is sent to a high-temperature natural gas fired furnace for melting at ca. 1400°C. The furnace is typically divided into three sections, with channels that aid glass flow. In the first section, the batch is melted. The molten mixture flows to the second section, the refiner, where the temperature is reduced to about 1370°C. The last, third section is the forehearth, where the molten glass flows into bushings made of platinum and rhodium that, in the next step, are used to extrude the molten glass into fibers. This is where the melting stage ends.

Improving furnaces over the years has greatly streamlined the fiberglass process. The use of larger furnaces with several channels with dedicated forehearths has significantly increased the throughput. Another major break­through was the introduction of dig­ital controls in furnaces that precisely keep the glass temperature as it flows through the sections. Digital controls also maintain a smoother, steadier flow to the fiberization equipment, avoiding air bubbles or other interrup­tions that could cause discontinuities in fibre formation.

The latest generation of furnaces, where almost pure oxygen is burned, have contributed to yet another re­duction of the glass fibre production cost. This allows for cleaner burning of natural gas, which allows for high­er temperatures and more efficient melting of glass. The new technology also lowers operating costs by using less energy and reduces nitrogen ox­ide (NOx) emissions by 75 percent and carbon dioxide (CO2) emissions by 40 percent.

Despite all these refinements there is still room for improvement. The weakest link in the whole process are the refractory bricks that line the fur­nace interior. The continuous process of melting and moving the glass wears away the bricks Efforts are being made to increase the brick’s service life. This is important because the glass fiber production is a continuous process. Once launched, cannot be shut down. Manufacturers say that a typical fur­nace averages 12 to 15 years between rebuilds, with seven years as a worst-case scenario. Reconstruction or pur­chase of a new furnace costs between $ 10 and $ 15 million, so extending the refractory brick service life and pro­longing the life of the furnace is very important from an economic point of view.

The most common approach to glass melting is the direct process, whereby the molten glass is trans­ferred directly from the furnace to the fibre-forming equipment. Also used, though less often, is the so-called in­direct melting, whereby the molten glass is sheared and rolled into mar­bles. The marbles are cooled, pack­aged and then transported to a fiber manufacturing facility where they are remelted for fiberization.

Glass fibre formation, or fiberiza­tion, involves a combination of extru­sion and attenuation. In extrusion, the molten glass passes out of the fore­hearth through a bushing made of an erosion-resistant platinum/rhodium alloy with very fine orifices. One bush­ing may have from 200 to even 8,000 such holes. Bushing plates are heated electronically, and their temperature is precisely controlled to maintain a con­stant glass viscosity. Water jets cool the filaments as they exit the bushing at roughly 1200°C. Then the molten streams are captured by a high-speed winder. Because it revolves much fast­er than the molten glass stream exit the bushings, tension is applied, draw­ing them into thin filaments with di­ameter from 4 to 34 μm, i.e. one tenth of the thickness of human hair.

At this stage, mechanical winders draw the fibres at linear speed 61 m/s through an applicator that covers the fibres with a suitable chemical coat­ing, so called sizing, to support their further processing, and to improve the final product quality. This process is called coating.

Size is typically added at 0.5 to 2.0 percent by weight and may include lubricants, binders and/or coupling agents. The lubricants help to pro­tect the filaments from abrading and breaking as they are collected, wound into forming packages, and processed by weavers or other equipment Cou­pling agents cause the fiber to have an affinity for a particular resin chem­istry, improving resin wet out and strengthening the adhesive bond at the fiber-matrix interface. Some size chemistries are compatible only with polyester resin and some only with epoxy while others may be used with a variety of resins.

The size chemistry is crucial for fiber­glass performance. Experts believe that in many composite applications, performance can be achieved via size chemistry as effectively as, if not more than, glass batch chemistry. For exam­ple, the size chemistry used in the pro­duction of wind turbine blades allows to improve the blade’s fatigue life by one order of magnitude. It’s been ac­complished improving fibre wet out and fibre adhesion to all resin types.

Finally, the drawn, sized filaments are collected together into a bundle. Bundles make up a strand composed of 51 to 1,624 filaments. The strand is wound onto a drum into a form­ing package that resembles a spool of thread. The forming packages, still wet from water cooling and sizing, are then dried in an oven. Afterwards they are ready to be palletized and shipped or further processed into chopped fi­bre, roving or yarn. Roving is made of one or more strands that can be twist­ed to enhance the yarn integrity in further processes such as weaving. An assembled roving, for example, made from 10 to 15 strands is wound togeth­er into a multi-end roving package. 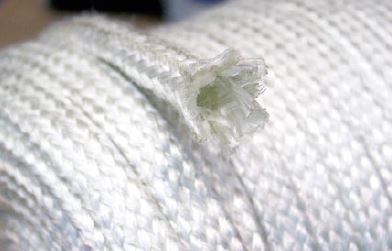 With the development of glass fib­ers, its global market has developed. Thirty years ago, glass reinforcements for composites were of mainly two types: E-glass and S-glass. E-glass was one of the first used to produce contin­uous glass filament and still makes up most the world’s fiberglass production today. With the growing demand for more specialized products, manufac­turers were developing more types of glass for specific types of applications.

Technological development has led manufacturers to make further refine­ments to improve the properties of glass and its processability. One exam­ple is a trend in E-glass manufactur­ing toward the removal of boron. This treatment not only reduced produc­tion costs, but also reduced emissions, making the product greener.

Another modification was the introduction of S-3 glass, which is a high-quality glass fibre with a speci­fication tailored to the ordering party’s individual requirements. An example is a glass called HPB, which has been specially developed for medical im­plants.

There are currently two trends in the fiberglass market. The first is the desire to increase production volume, and the other is to reduce costs. In both cases China takes the lead. Chi­na has been a key driver in the growth of global fiberglass production since 2002. In part because of its own rap­idly rising rate of domestic consump­tion, estimated at 515,000 metric tonnes in 2007. China’s annual growth rate for glass fiber production aver­aged 33 percent from 2002 to 2006. Its 2007 output of 1.45 million metric tonnes accounted for 37 percent of total global production Thus China has surpassed the U.S. until then the world’s largest fiberglass-producing nation.

China is the world leader in glass production, but they mostly produce standard E-glass. Most of the high-val­ue, high-performance glass remains in North America. Nevertheless, China is beginning to chase America in this respect. Low labour costs and sup­port of the Chinese government gives Asia a big advantage over other mar­kets in this regard, especially in lobar intensive production. An example is the production of assembled rovings, which has mostly moved to China, while most of the high-performance special-purpose fibres are produced in America and Europe.

It is estimated that by 2020 the value of the global fiberglass market will be close to $ 16 billion. This market value increase is mainly due to the increas­ing use of fiberglass in many indus­tries, i.e. construction and engineer­ing. The largest demand is in the North American and Asian markets. Asia and North America account for over 78% of the world’s fiberglass production.

The largest demand for fiber is in China, which consumes more than half of the world’s supply of this raw mate­rial. Demand is steadily increasing in other countries as well. The biggest growth is noted in the USA and Japan, and these are the markets of manufac­turers’ greatest interest.