CARBON FIBRES: WHAT ARE THEY AND WHAT DISTINGUISHES THEM?

The carbon fibres are known for a long time. A carbon fibre (CF, also called graphite fibre) is nothing else as a fibre, which is practically in whole composed of the stretched carbon structures.

The carbon fibre constitutes a fabulous material in all respects. It is unusually light, but very durable. A single filament is many times thinner than a hair.

In 1958 Roger Bacon created the high-performance carbon fibres at the Union Carbide Parma Technical Centre, currently GrafTech International Holdings, Inc., located outside of Cleveland, Ohio. These fibres were manufactured by heating strands of rayon until they carbonised. This process proved to be inefficient, as the resulting fibres contained only about 20% carbon and had low strength and stiffness properties.

In the early 1960s of the 20th century, a process was developed by Dr. Akio Shindo at Agency of Industrial Science and Technology of Japan, using polyacrylonitrile (PAN) as a raw material. This had produced a carbon fibre that contained about 55% carbon. In 1960 Richard Millington of H.I. Thompson Fiberglas Co. developed a process (US Patent No. 3,294,489) for producing a high carbon content (99%) fibre using rayon as a precursor. These carbon fibres had sufficient strength (modulus of elasticity and tensile strength) to be used as a reinforcement for composites having high strength to weight properties and for high temperature resistant applications.

The high potential strength of a carbon fibre was realised in 1963 in a process developed by W. Watt, L. N. Phillips, and W. Johnson at the Royal Aircraft Establishment at Farnborough, Hampshire. The process was patented by the UK Ministry of Defence, then licensed by the British National Research Development Corporation to three companies: Rolls-Royce, Morganite and Courtaulds. Within a few years, after successful use in 1968 of a Hyfil carbon-fibre fan assembly in the Rolls-Royce Conway jet engines of the Vickers VC10 handled by the BOAC, Rolls-Royce took advantage of the new material's properties to break into the American market with its RB-211 aero-engine with carbon-fibre compressor blades. Unfortunately, the blades proved vulnerable to damage from a bird impact. This problem and others caused Rolls- Royce such setbacks that the company was nationalised in 1971. The carbon- fibre production plant was sold off to form Bristol Composites.

In the late 1960s of the 20th century, the Japanese took the lead in manufacturing PAN-based carbon fibres. A 1970 joint technology agreement allowed Union Carbide to manufacture the better industrial product in the Japan’s Toray Industries, and the United States could dominate on the market. Morganite recognised that carbon-fibre production was peripheral to its core business, leaving Courtaulds as the only big manufacturer in the United Kingdom. A continuation of a cooperation with the employees of Farnborough turned out to be helpful in striving towards higher quality and an improvement of the production speed as Courtaulds developed two main markets: aviation and sport equipment.

During the 1960s of the 20th century, experimental works conducted in order to find the alternative raw materials led to the introduction of the carbon fibres made from a petroleum pitch derived from oil processing. These fibres contained about 85% of carbon and had excellent flexural strength. Also, during this period, the Japanese Government heavily supported a carbon fibre development in its own country and several Japanese companies such as Toray, Nippon Carbon, Toho Rayon and Mitsubishi started their own development and production. After they later began to be leader, the companies form the United States and Europe were encouraged to take such activities, both by their development, and a contractual acquisition of the knowledge about the carbon fibres. The above-mentioned companies are Hercules, BASF and Celanese in the United States and Akzo in Europe.

Since the late 1970s, further types of carbon fibre yarn entered the global market, offering higher tensile strength and higher elastic modulus. For example, T400 from Toray with a tensile strength of 4,000 MPa and M40, a modulus of 400 GPa. Intermediate carbon fibres, such as IM 600 from Toho Rayon with up to 6,000 MPa were developed. Carbon fibres from Toray, Celanese and Akzo found their way to an application in the aerospace industry from the secondary to primary parts first in military and later in civil aircraft as in McDonnell Douglas, Boeing and Airbus planes. Until 2000 more and more important became the industrial applications of the highly refined machine parts in the Middle Europe.

A further production has developed since 2000. The main production plants have commenced their operations in Turkey, China and South Korea.

On the carbon fibre market are available the carbon fibres under the trade name ToraycaR (Toray), TenaxR (Toho- Tenax -Teijin), the other manufacturers of the carbon fibers include: Mitsubishi Rayon, Zoltek, SGL Group, The Karbon Company.

The carbon fibres manufactured mainly as a result of a pyrolysis of polyacrylonitrile (PAN). Their properties are, first and foremost, influenced the manufacturing parameters. While comparing the strength parameters of the different materials it turns out that this parameter is the best for the carbon fibres.

Carbon fibres are characterised by small density, high tensile strength and high Young’s module, high fatigue strength and creep resistance, they damp vibrations well and are very resistant to abrasion. They also exhibit great dimension stability, low thermal conductivity at the low temperatures, are resistant to rapid temperature changes, action of many chemical media, and are characterised by good electrical conductivity, etc. The high tensile strength of the carbon fibre matched with its high Young’s modulus are connected with a degree of the fibre structure orientation in respect of its axle, and also a density of the lateral bounds. 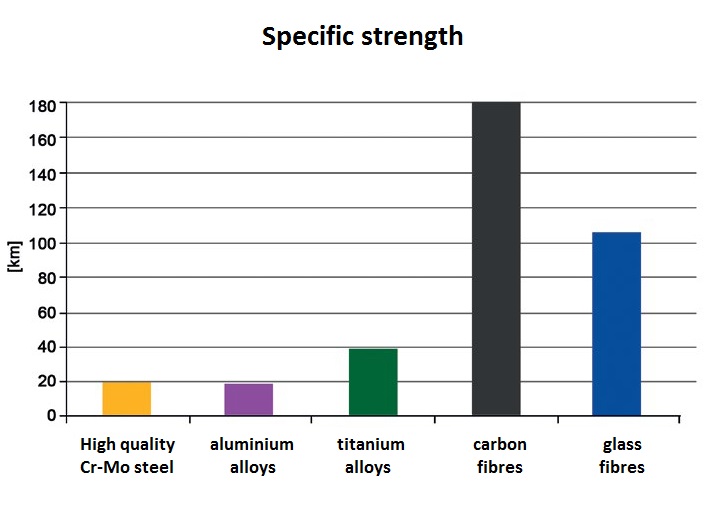 A thermal resistance of the carbon fibres is unique and exceeds in this respect any known materials, except graphite. They do not melt, but sublime at the temperature of 3500°C.

They are non-polar, do not exhibit wettability, but they are sensitive to oxidation. In turn, in the non-oxidising atmospheres, at the temperatures up to 2000°C the carbon fibres do not lose their properties, what distinguishes them unusually favourably among the glass and aramid fibres. The carbon fibres exhibit very weak ability to bound with a polymer matrix, as they are poorly wetted by the resins. In order to improve the latter property, prior to pouring with a resin, the carbon fibres are a subject of oxidation.

If upon surface oxidation, the fibre is to be stored for some time, you should coat its surface with a proper preparation that secures its surface against moisture absorption, as well as reducing its susceptibility to cracking while making a composite or during its work.

An input material for manufacturing the carbon fibres are different organic fibres. In the industry are mainly used the cellulose fibres, polyacrylonitrile fibres (PAN) and appropriately refined mesophase pitch.

When compared with the PAN fibres, the pitch fibres characterise with higher density, higher value of Young’s modulus and greater thermal and electric conductivity.

As a consequence of the higher degree of order of the internal structure of the carbon material is lower strength and smaller extension. The carbon fibres may be – without any loss of the basic mechanical properties – used in the structural composites subjected to the loads at the temperature up to 2500°C.

Compared with the other materials they are unmatched in this respect.

A manufacturing technology of the carbon fibres is continuously improved and led to obtaining the fibres with the perfect properties. In particular, it is worth noticing a fact that simultaneous increase in strength and stiffness of the modern fibres. These high parameters resulted in remaining only a part of the manufacturers on the market, what at the same time causes maintaining permanent high prices of this product. 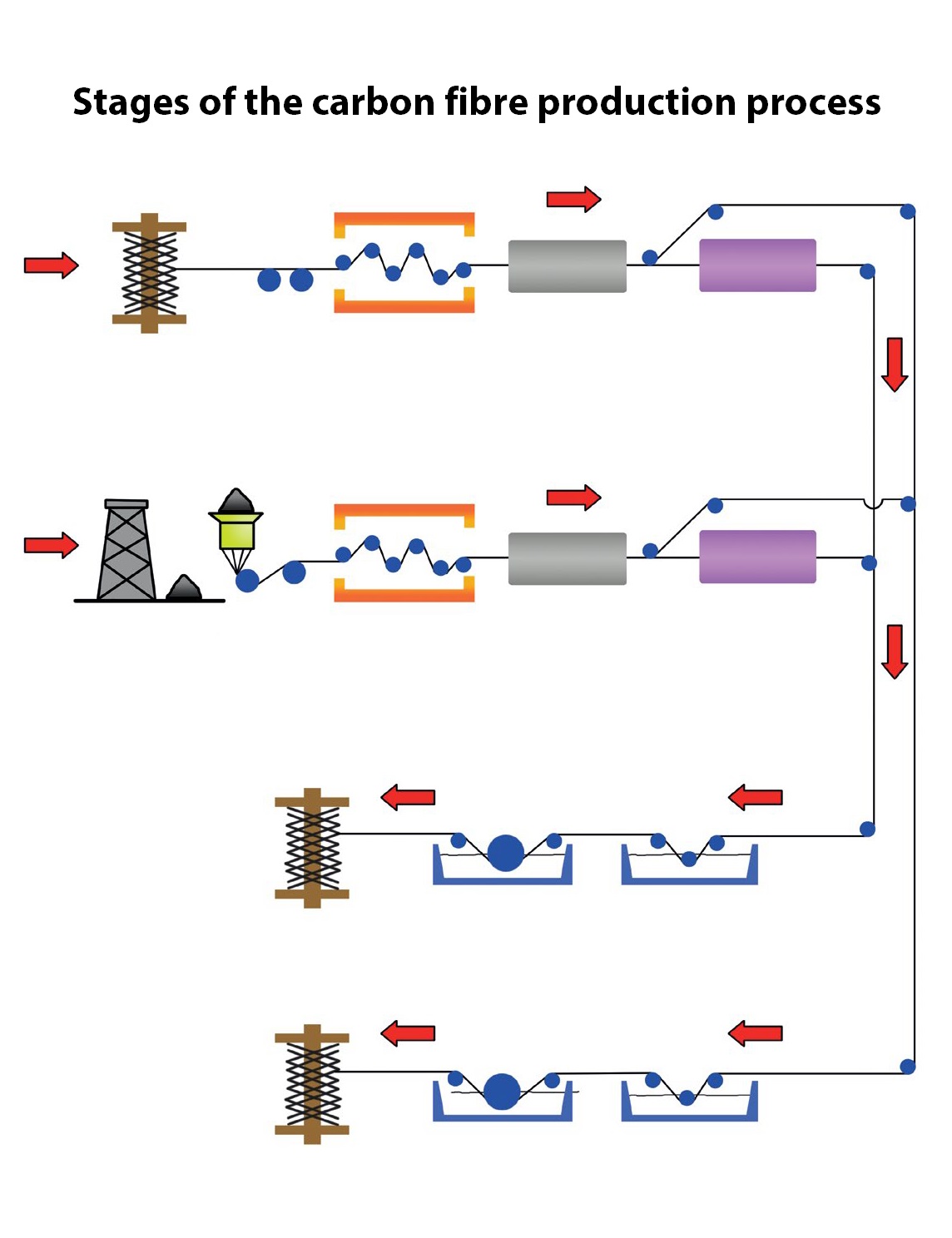 At the first stage of pyrolysis, the fibres are heated at the temperature between 220÷250°C within 50 hours until they are totally oxidised.

At the second stage the fibres are heated at the temperature of 1000°C in the neutral atmosphere. Then fibre carbonization takes place aimed mainly at removing the other components apart from carbon. They are created the hexagonal rings corresponding to a graphite structure, what enhances their strength.

At the third stage of pyrolysis, at the temperature up to 3000°C and increased pressure, a carbon crystallization process takes place. A fibre structure becomes similar to a structure of a natural graphite.

In turn, a pitch fibre is woven using a method from an alloy and it is subjected to an oxidative stabilization, and then carbonisation and, if needed, graphitization.

Upon carbonisation a pitch fibre has low tensile strength (1000 MPa) and low elongation at break, but it features a very high elasticity modulus (450 GPa). If it is subjected to graphitisation at the temperature of 2500°C, so the elasticity modulus increases up to approx. 700 GPa.

For the last thirty years it has been observed a quick development of the manufacturing technology of the fibrous carbon materials, called the carbon fibres.

A scope of the application of the raw carbon fibres in the different technical branches is limited due to a few significant defects of these materials, such as: low resistance to oxidation in the increased temperature, a low degree of adhesion to polymers and inorganic binders, a small specific surface and a heterogenous microstructure. With regard to the above these fibres require a special modification.

An application of the carbon fibres depends on their physical properties (mechanical, electrical, thermal stability) and chemical properties (acid-base, oxidation-reduction, ion exchange-based, catalytic, sorption, resistance to oxidation and thermal stability), and these in turn depend on the structural factors of the fibres and the parameters of their manufacturing process.

The modified carbon fibres featuring the unique properties unattainable in the case of the metals, ceramics or organic polymers, are a valuable and frequently irreplaceable material in many industrial branches. Due to the rather high manufacturing costs, the carbon fibres are used first and foremost in the space and aviation structures, and the automotive industry.

The above-mentioned properties combined with a great capability to damp vibrations and a significant resistance to fatigue and abrasion make from the carbon composites a perfect material for manufacturing sport accessories such as: fishing rods, poles, tennis rockets, skis, bicycle and vehicle frames, sails and yacht hulls. The cheap, cut carbon fibres are applied to reinforce the construction materials.

A low coefficient of thermal expansion and a high coefficient of thermal conductivity, high strength and stiffness at the very high temperature, as well as high resistance to abrasion constitute the properties thanks to which the carbon fibres were used in a form of the carbon-carbon composites in the ablation heat shields of the space shuttles and space rockets and in a form of the materials dedicated to the friction surfaces of the brakes and clutches, as well as the aerodynamic brakes.

A disadvantage of the carbon fibres and their composites consists in their slight impact resistance causing an increase in susceptibility to mechanical damages during the manufacturing process. Furthermore, the carbon fibre is easily burnt at the temperature higher than 600°C in the oxidizing atmosphere, what restricts its usage to a lower temperature or a neutral atmosphere.

The carbon fibres subjected to graphitisation and intercalation are characterised with good electric conductivity. This property matched with the carbon electrochemical properties enables to use the fibres for a construction of the microelectrodes, electrodes for the galvanic and fuel cells. Introducing the intercalated fibres for the polymer matrices ensures very good electric conductivity of the composites, what is used in the light and non-magnetic conductors of electric current, discharging static electricity and shields of electromagnetic fields.